When the scorpion kick resulted in a goal, witnessed by the thousands who were watching, including my dad and I, the marvel at the beauty quickly swelled into a chant for “the goal of the season”.  Perhaps it was because just less than 7 days ago that Henrik Mkhitaryan has scored a similar one to sink Sunderland.

In football there is no such thing as similar but a goal is usually being characterised by the one who scored it. It was because the Arsenal front man and Henrikh Mkhitaryan have such distinct positions and styles, that it’s way too early to judge who could be the winner for the “same” type of finish.

Undoubtedly both Giroud and Mkhitaryan have been in form for the last few weeks and coming in as the saviours for the respective teams. Giroud’s last goal vs. West Bromwich Albion has gotten him a lot of meme on social media, some even hailed him as the “King”. To put it in numbers, he has scored 6 times in the last 4 starts granted by Wenger. As for Mkhitaryan, he has delivered in all angles for his national team and club. His “wonder goal” has revived the hope of the faithfuls in Old Trafford, that the Armenian could be the reason of their “GG Manchester United” chant.

To view it from a technical perspective, whose goal has a higher difficulty? Looking at Giroud’s 17th minute’s goal, it was converted from a cross by Alexis Sanchez, and Giroud had his right back heel on the ball in between Flamini and Tomkins. As for Mkhitaryan, he almost had a free back-heel for his acrobatic goal. After the goal by Giroud, tweets were suggesting that Giroud has done better with luck at his side, but not to forget Mkhitaryan actually was “clearly” offside, only for the forgetful linesman who left his glasses at home before the match.

For Le Boss, Giroud’s goal has been listed among the Top 5 Goals scored in Arsenal’s history during his Arsenal reign.

Here are the recap of the famous goals from Wenger’s pocket:

Nwankwo Kanu’s goal vs. Chelsea (1999, among his hattrick of goals):

To be very honest, one of the fallacy of the Gooners (or perhaps the team itself), is that they are too clingy with the past and hope for the Invincible at the Emirates. It’s better for us to  keep grinding like how Alexis Sanchez has done for us day in and day out, instead of cheering for Giroud’s as he does wonders. Done is better than perfect. It’s the same here on the pitch. As much as you would love to have a perfect season, it’s better for you to keep your head down and score goals. The best defence is offence, as they phrase it. Don’t fall for the toast of a wonder goal scorer but forgets that we have 19 more games to close the season.

Till then, we will know if wonder goals can buy you title. 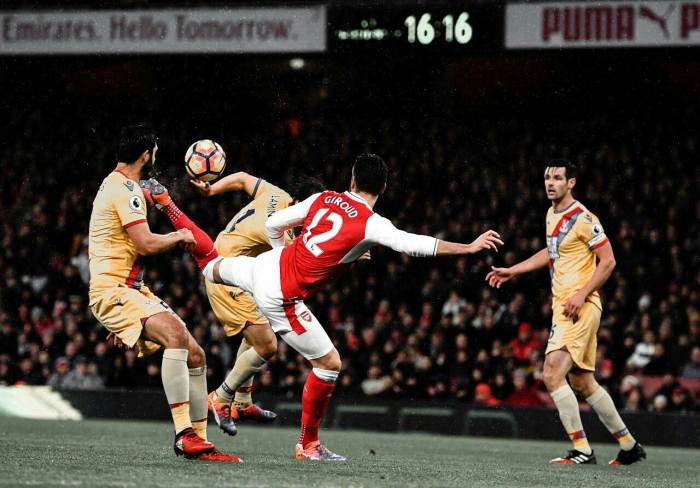